skip to main | skip to sidebar

I read Dan’ Brown’s book The Lost Symbol this weekend.

It made me think in a flight of imagination that Ann Brown could write The Lost Thimble.

But how does the plot go?

The Thimble is missing due to being mislaid, because of un-use. (is that a word)?

The search begins; and I have run out of ideas already – help me girls! I see a huge English house, green gardens, yew trees, and ladies in long skirts. But I am already imagination out!
Over to you – a sentence is enough! But make it follow on!
Posted by Coral at 2:11 PM 3 comments:

Apparently much fun was had by all, and they raised R1100. Wow! 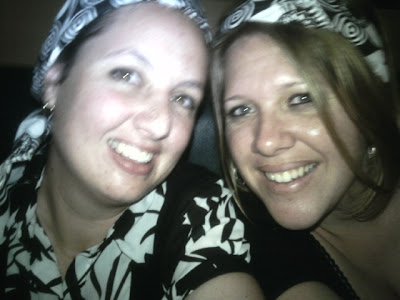 A photo of Coralie and Nicole. 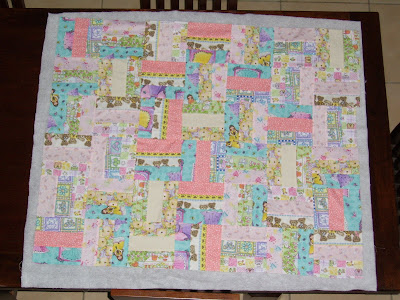 And a photo of the quilt I made this weekend for Kylah. Kylah is Coralie's ex- Michael's daughter.

it's a party - at Palm Beach in Cape Town 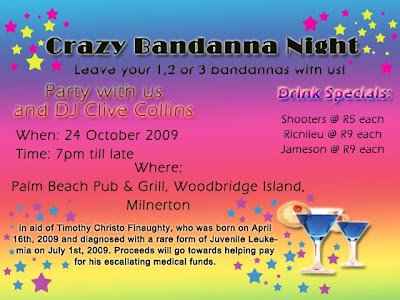 Make an effort and get there! Please!!
Posted by Coral at 1:38 PM 2 comments: 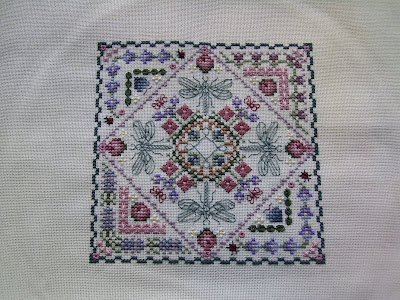 Finally finished. I will be making it up into a cushion cover for Timothy's oncologist. 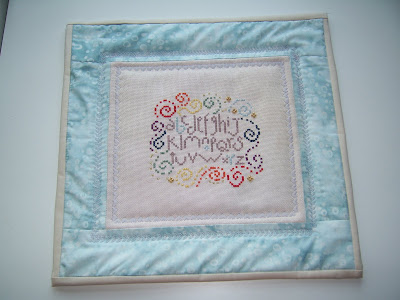 My entry into Anna's competition, Swirlygig - it is named 'In Celebration of Tim' - note the letters b.o.y. are highlighted. It is quilted, and has machine stitched hearts and leaves on the border. It did not win, but makes me smile - the winner was in both categories the one I voted for!

I know you all think I have been 'out for lunch' but I have been battling with a virus. It didn't flatten me, but it did flatten my spirits. So, no posts.

I am pretty fed up with how my blog has deteriorated, with my one track mind. Tim is not the only subject. He is dreadfully important, but I feel to tell you how funny the Indian Mynah birds were the other morning would be so trivial, but I will tell you anyway;

The birds were sitting on the railing of the balcony outside my bedroom. It was early morning and the curtains were closed. The sun was on the curtains. My cell phone was wailing that it's battery was running flat. Every time the cell phone tried to notify me that the battery was in danger of failing, a little bird tried to imitate the ring tone. It was cute and made me laugh!

You have not seen a picture of my finished 'Miss Kitty's Dragons' By Just Nan, and this has been finished for 4 weeks. Bad me!

So you see, my posts will have to lighten up sometimes, for 'me own sanity'.
Posted by Coral at 9:34 AM 2 comments:

Who has a paypal international account? I need help!

Please think positive thougths for my dad, he has been diagnosed with hip joint problems and is in terrible pain.

I am going to be a granny again! I have known for 5 mins, and now you know too! When I was with Coralie over the weekend we did a tarot card reading, and I saw a pregnancy. Well on Sunday she started wondering when she had last a period, and then thought of a home pregnancy test. It is postive!!

Here's my idea, everyone who buys a Sunflower Bandana forward it to me after you have used it. I will make quilts from them and raffle them off to raise funds for Tim's medical expenses. If you want to foward them to me just email me and I will send you my address.
Posted by Coral at 1:06 PM No comments:

Wow, lots to tell you all.

I flew to CT on Thursday morning and slept all the way – bargain! But I lost my pillow in the airport on the way down, I know exactly where it was lost, and it was gone! So today I have a stiff neck! From sleeping all the way back.

When I arrived Henk’s mom had Tim in her arms, he looked dreadful. He had been taken out of ICU and discharged as they did not want him in the hospital with sick children. He was as weak as a new born. Poor baby. Henk’s mom Lauretta then went into the airport to leave CT to JHB (granny tag team) and Coralie and I went on to the Red Cross hospital for Tim’s check up. His oncologist even phoned his paediatrician to say “His sparkle has gone”. But by the end of the day he was so improved, I think the fact he has started eating like a horse helps! He loves Purity carrots!

So, at this stage he has spent almost ten days in the hospital having blood transfusions, and platelet transfusions.

Thursday night he kept up Coralie and Henk so Coralie stayed home on Friday. I was supposed to have him all day. But it was for the best as he had a really bloody nappy later in the day. Henk had taken Coralie’s car as his had a flat battery and we had no transport. We had to ask a neighbour to take us to the paed, as we were car-less. I had phoned the Dr’s office to ask if we could just walk straight in the Dr’s rooms as Tim had just come out of hospital and was still weak. So we saw the Dr very quickly and he wanted more blood tests taken. Henk came home to swap cars and give us Coralie’s one back. We then took Tim to have his bloods done. And later landed up taking him back to hospital as he needed more blood transfusions and platelets. This poor child has transfusion after transfusion, and his blood counts still are not high enough. (I am a bit foggy on why he needs the bloods at all, the platelets I understand). The most amazing thing is that this poor kid after the platelets has a totally different colour and is so calm. So, the poor baby was back in hopistal. I have to admit neither Coralie or I took it well. The staff all say ‘Hello Timothy’ when they see them. Nobody wants to be that recognised!

So he spent another night in hospital. He has started playing with his bear; it is so sweet.

So Saturday morning, Coralie and I went to see him early on, and when he went to sleep we left to go to the mall. We spent a bit of money and had a breakfast together. That was one of the high points of the weekend. We went back to the hospital and about 17h30 we took him home. The sister had tried to take bloods from his neck and there is a huge bruise on his neck, and his skin is so thin when the plasters are removed, they tear off his skin, so he really does not look great as he had to have his head shaved as well to get his drip in. He is covered in bruises – at every joint there is two bruises. They cannot get a needle in just anywhere. For the blood tests they are taking samples from his heel now, as there is nowhere else to get a sample from.

So I left early on Sunday, and got home about lunchtime. I was sad to leave but had to get home and to work, I have a stock take this week to complete.

And this morning I hit a dog on the way to work. I was traveling down a remote road and something ran in front of my car, I couldn’t see what it was, then realized two dogs were chasing it, and the leading one landed up being hit by my car bumper. I am not impressed and have a good mind to stop at the nearest farm house to see if the dog is okay and see what their insurance status is as they are liable. Sigh, I am so fed up with excitement!
Posted by Coral at 8:59 AM 3 comments: